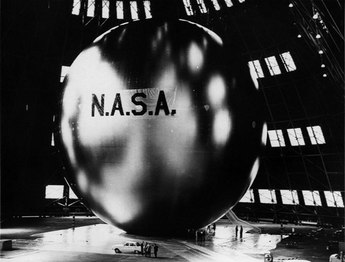 The idea behind a communications satellite is simple: Send data up into space and beam it back down to another spot on the globe. Echo 1 accomplished this by essentially serving as an enormous mirror 10 stories tall that could be used to bounce communications signals off of.
While, Echo 1 was not the first satellite to broadcast a message from space (a recorded Christmas greeting from President Dwight Eisenhower was transmitted in December 1958 during the Project SCORE satellite test), it was also the first to facilitate two-way, live communications.

Echo 1 was made of a 31,416 square-foot (2,918 square-meter) sheet of Mylar plastic film only 12.7 microns thick, or roughly one-tenth the width of a human hair. That sheet was covered smoothly with 4 pounds (1.8 kg) of reflective aluminum coating. Altogether, with inflating chemicals and two radio tracking beacons powered by five batteries and 70 solar cells, the balloon weighed just 132 pounds (59.8 kg).

The satellite was commonly known as Echo 1 but was actually formally named Echo 1A. The original Echo 1 was destroyed after a failure in the rocket designed to launch the giant ball into space, which scientists had dubbed Shotput.

More than a giant space balloon

Among Echo 1's many contributions was the first live voice communication via satellite, delivered by none other than President Eisenhower himself.  In the radio message, Eisenhower said, "This is one more significant step in the United States' program of space research and exploration being carried forward for peaceful purposes. For the duration of its life, the satellite balloon, that reflected these words, could be used freely by any nation for similar experiments in its own interest."

The first coast-to-coast telephone call using a satellite was also made with Echo 1, from one researcher to another as a test, as was the first image transmitted via satellite: a portrait of Eisenhower.
​
The giant, silvery balloon was large enough to see with the naked eye over most of the Earth, proving brighter than most stars, and was used to help broadcast radio transmissions across continents.

"Amateur ham radio operators played around with it by bouncing signals off of it," The satellite also proved useful in calculations of atmospheric density and solar pressure.

The spacecraft proved remarkably durable, surviving a meteor shower. Still, it proved susceptible to sunlight, which could shove it around, enough to push it back into Earth's atmosphere. It burned up on re-entry on May 24, 1968.

Although NASA sent up a second Echo satellite for more experiments, it ultimately chose satellites that could actively transmit data, rather than passively reflect signals.